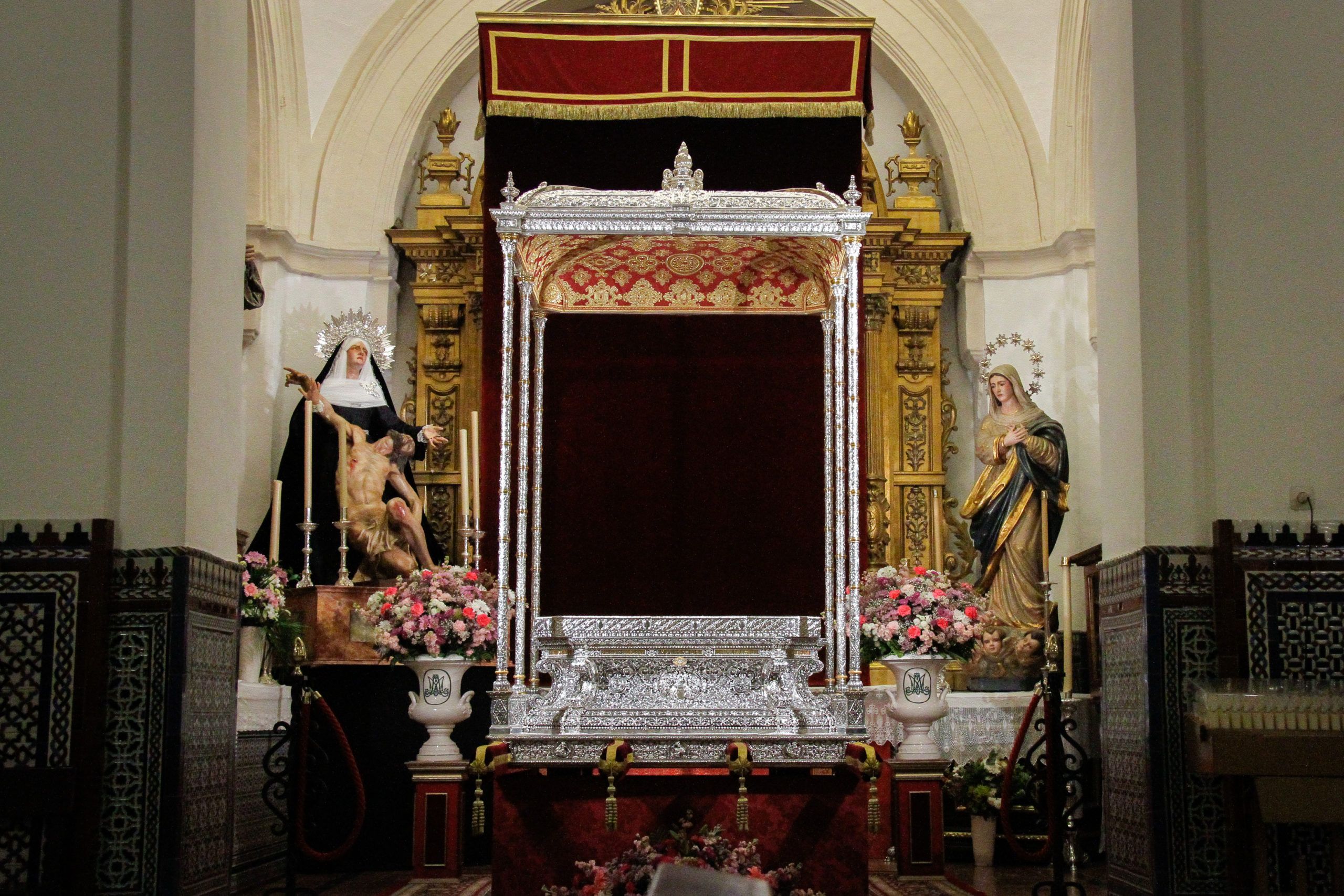 The new pilgrimage platform of the Virgin of El Rocío is already in Almonte.

Almonte is a hotbed of emotions during these weeks of May. Its streets are decorated to live the last days of the Virgin in the Parish of the Assumption. To say goodbye, the Blanca Paloma will leave on May 22, dressed as Queen. And it will do so by premiering new silver platforms, which are already in the Almonteño temple.

This ambitious project that was set by the Governing Board of the Brotherhood https://hermandadmatrizrocio.org/wp-content/uploads/2021/09/exhibition-gallery-item-5-1.jpg at the beginning of its term, in 2019, has had as its goal the procession through Almonte, whose characteristics are different from those of El Rocío: narrower and cobbled streets. The main premises have been to reduce the weight and increase the safety of the Virgin. These objectives have been achieved, despite the difficulties of the process, in the midst of the well-known health situation.

The weight reduction has been very considerable, more than 30% with respect to the current platforms, thanks to the materials used in its structure: carbon fiber and aeronautical aluminum. The overall coordination of this project has been in charge of the Sevillian company INESPASA, under the direction of Antonio Ramírez, together with Cristóbal León and Joaquín Cruz, who have designed the technical project of the pedestal and have manufactured the entire internal structure of the whole paso. This team, which has been working and collaborating with the Brotherhood for years https://hermandadmatrizrocio.org/wp-content/uploads/2021/09/exhibition-gallery-item-5-1.jpg, has been joined by three industrial engineers from Almonte. From them, José Moreno, has made the design, the technical project and the structural calculation of the canopy and the new platforms, as well as the design of the new rods; with the collaboration of David Vega and Miguel Ángel Gallardo.

In the ornamental aspect, one of the novelties is the interior lining of the canopy, which until now was made of metal and changes to a textile base, made of silk spun silk, embroidered in gold, reproducing the design and gold work drawings of the old canopy. A work that has been done in the embroidery workshop of Fernando Calderón, in Jerez de la Frontera. 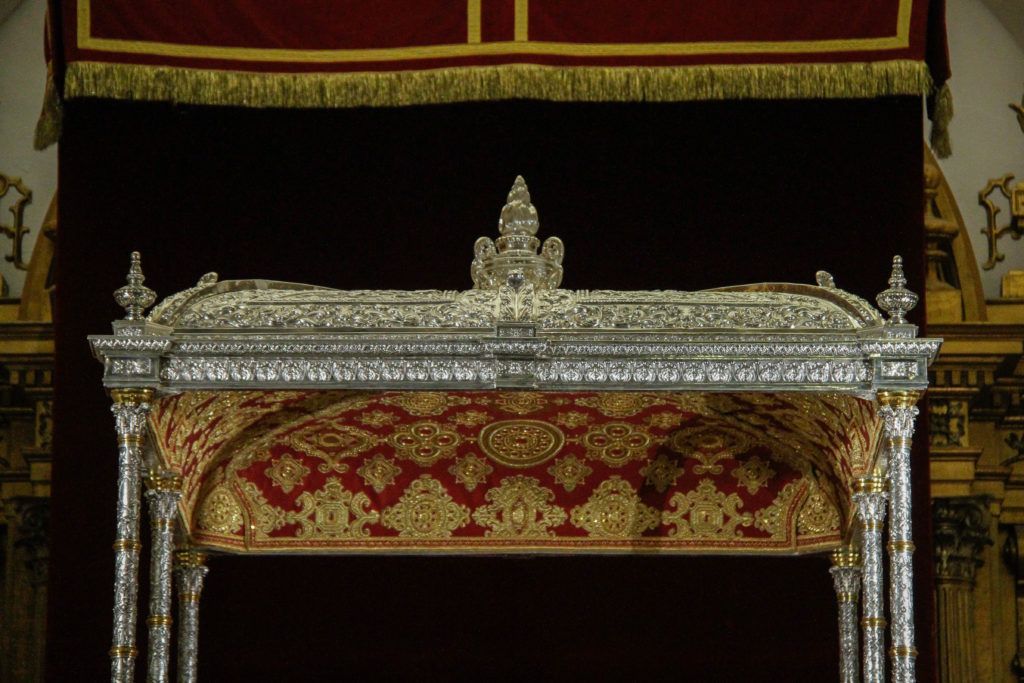 The pedestal, as already announced in the presentation of the project last summer at the Museo de la Villa de Almonte, as part of the exhibition “Otorga Lo Imposible”, has been carved in the Sevillian workshop of Ramón León. It draws from the bases of the Virgin’s 1934 platform, by Cayetano González, and also from the aesthetics of the Hermandades’ 1957 mantle, by Joaquín Castilla, with a nod to the primitive platforms of Juan de Astorga, from the beginning of the 19th century. A rociero style consolidated and imprinted in the retina of the devotees.

The goldsmith workshop of Ramón León has also carved the beams and the molding of the platform, which maintains the lions as an element, symbolizing courage, power and justice. Almonteños were also popularly known as Almonteños. Manuel Siurot, in his work La Romería del Rocío wrote: “Apretarse almonteños, noble lions, that the fight of hearts is approaching”, in allusion to the moment of the procession”.

On each of the beams, there are cartouches with the inscription of the traditional “vivas” to the Virgin. As a special detail, the face facing the interior of the central beams bears the phrase of the bullfighter Rafael el Gallo, in allusion to the Virgin of El Rocío: “Grant the impossible”. On the base, the carving highlights the great importance of the dedication of the Virgin, her pilgrimage and the natural environment of Doñana.

To expand and enrich the iconography of the new paso, adapted to the design of Ramón León, and those already proposed by the artist, the participation of Manuel Galán from Almonte, doctor in Art History and director of the Museum-Treasure of the Brotherhood https://hermandadmatrizrocio.org/wp-content/uploads/2021/09/exhibition-gallery-item-5-1.jpg, has been counted on. 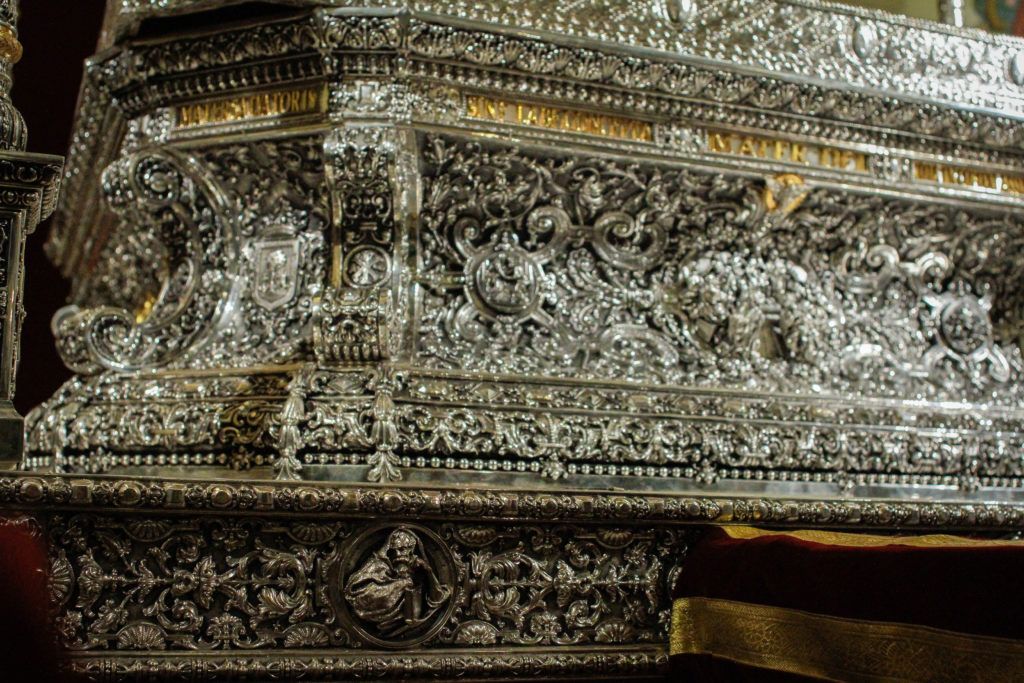 The design and execution of the outer covering of the canopy, in silver, has been carried out in the workshops of Orfebrería Villarreal. Maintaining its finish the imprint in size and design that already has the current canopy and that have become a recognizable icon throughout the orb rociero, enriching the drawing and finish of gold work.

Therefore, the functionality in the design will not disturb the popular form of the procession of the Virgen del Rocío; avoiding additions that would cause snags or damage to the people of Almonte. The design of the poles has also been especially careful, as they are the most exposed element in the procession, which is why it has been taken into account that no volume should be excessive.

Miguel Báez Spínola, “Litri V”, a member of an important bullfighting dynasty in Huelva, linked for generations to the devotion to the “rociera” (religious devotion), has made a very significant contribution to the financing of the project, for which a popular subscription has been opened.

The blessing of these new platforms will take place this afternoon in a mass to be held at 20 hours and will be officiated by the Bishop of Huelva, Santiago Gomez Sierra, and sung by the Choir of La Palma del Condado.